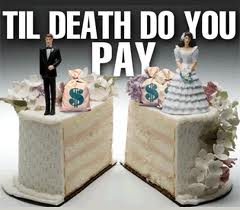 I just recently wrote about the State of Florida and the move for alimony reform. Well, it turns out Florida is not the only state seeking a change in alimony laws. Foxnews.com has posted an article titled, “New Jersey lawmaker looks to update alimony rules after advocacy group claims lifetime punishment.”

The article discusses the issue of permanent/lifetime alimony and it’s outdated and inequitable nature. The article opens with, “Fairness must be put back into divorce court, an advocacy group in New Jersey is arguing, pushing legislation to update what it says are antiquated alimony laws that disproportionately favor the recipients of alimony, regardless of changing circumstances. ‘Lifetime alimony and the family court system in New Jersey are driving real people to the brink,’ Tom Leustek, president and founder of New Jersey Alimony Reform, told FoxNews.com. ‘My own divorce resulted in a lifetime alimony order in 2008. I remember during one of the court hearings, the judge saying to me, ‘It’s not fair, but it’s the law.'”

The issues raised in New Jersey are mirrored by those in Florida. To learn more on alimony reform efforts in Florida see Florida Alimony Reform or contact a Jacksonville Divorce Lawyer.