As a Jacksonville divorce lawyer, I have encountered my share of clients that are not too fond of the idea of paying alimony to a former spouse.  I suppose I understand.  Alimony considerations are controlled by Florida Statute 61.08, but in general will be based on one person’s need versus the other person’s ability to pay.   For many people, it’s not the money its self, but rather the idea of being forced to provide support that they would rather not provide after the relationship has ended.  Simply put, people are angry and are driven by emotions surrounding divorces, those emotions often conflict with what the court has ordered regarding support payments.  People will search for ways to protest as much as possible without running the risk of being held in contempt for not following a judge’s order. 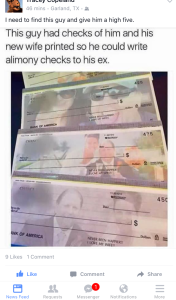 Take a look at the photo to the left. It shows a man and woman who were recently married.  Apparently, the photos are printed on checks that the man used to pay alimony to his ex-wife. Not all divorced couples hate each other, but it is clear to see that these checks were designed to take shots at the ex-wife every time she receives an alimony payment.  It makes for a good laugh on social media, but I wouldn’t recommend it under most circumstances.  As long as alimony is due, the court will have jurisdiction to enforce the support obligation. As long as the court retains jurisdiction, there are always things that the ex can do to complicate the former husband’s life.  Under Florida law, there is nothing wrong with what the husband has done here.   Although there are many many reasons not to antagonize and poke at an ex-wife, the law will allow this type of behavior.  Unless there is a provision in the divorce decree that can be used to attack these spiteful checks, the checks will be allowed.

My advice as a Jacksonville divorce lawyer is for the ex-husband not to poke the bear. For the ex-wife, it would be to cash the checks and enjoy the money. The ex-wife, however, under Florida law has the option to petition the court and ask that the payments go through the depository, rather than directly to her. It adds a middleman to the deal, but shuts down the ex-husband’s shenanigans.  At the Law Office of David M. Goldman, PLLC, our experienced divorce lawyers can help guide you through the divorce process and help protect your rights.  We also offer pretty awesome advice on what not to do in divorce case.  Call today for a free initial consultation.