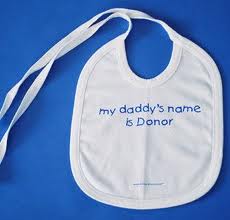 Here’s an interesting case. Four years ago, a Texas man split from his girlfriend, who was moving to California. They evidently split on agreeable terms; so agreeable, in fact, that he saw no reason to decline her request for his sperm to use in her in vitro fertilization.

She gave birth to triplets. Though acknowledging his biological paternity, the man went on with his life. He got married. He had no intent of ever being involved in the triplets’ lives. That all changed when his former partner sent him a letter requesting child support.

Unfortunately for him, the California law required child support payments to be made while the case was pending. So, while making the payments, the man challenged the requirement to do so. The first court found that he was legally obligated to make payments, so the man obviously appealed. There was no law directly on point in California; however, there was a law preventing donors (like him) from filing paternity claims against women who give birth to children using the donors’ sperm. The man argued that the converse should also be true; i.e., that he should not have to make payments to a woman who used his sperm for her in vitro pregnancy.

Thankfully, an appellate court agreed and held that he did not have any financial obligation to the woman or her children. Though the court held he did not have to make any more payments, he was still out the thousands of dollars he had to pay while the case was on appeal. He also had to pay attorney’s fees.

It’s unfortunate that the woman in this situation even tried to secure payments from him. It’s even more unfortunate that he was forced to make the payments at all. This just goes to show how sometimes the law is not in tune with modern technology like in vitro fertilization. It’s important to consult qualified attorneys before making decisions that could have legal implications. If you are in the St. Augustine, Florida area, contact a St. Augustine Family Law Attorney to discuss any questions you might have.