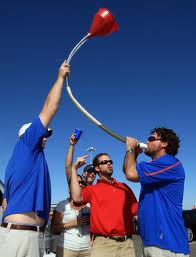 I can’t help but wonder with this weekends BIG GAME and the large amount of “cocktails” flowing, would Jacksonville domestic violence and or alcohol related crime rates experience an increase. With this question on my mind I decided to look into the relationship between alcohol and domestic violence.

I stumbled upon the Stop Violence Against Women website and read a page titled, “Myths About Alcohol and Domestic Violence.”

I also stumbled upon some figures which do suggest that there is a correlation between alcohol abuse and domestic violence. For example, researchers have found that one fourth to on half of men who commit acts of domestic violence also have substance abuse problems. Also, the National Committee to Prevent Child Abuse found that as many as 80 percent of child abuse cases are associated with the use of alcohol and other drugs.

If over this weekend or any time you become a victim of domestic violence contact a knowledgable Jacksonville Family Law Lawyer or a Jacksonville Personal Injury Lawyer. Also, should you be charged with an alcohol related crime contact a Jacksonville Criminal Defense Lawyer.